Recent graduate student Priyanka Chaudhari was interviewed about her research on the genetics of RoundUp resistance in hairy fleabane by California Ag Today: check it out here. 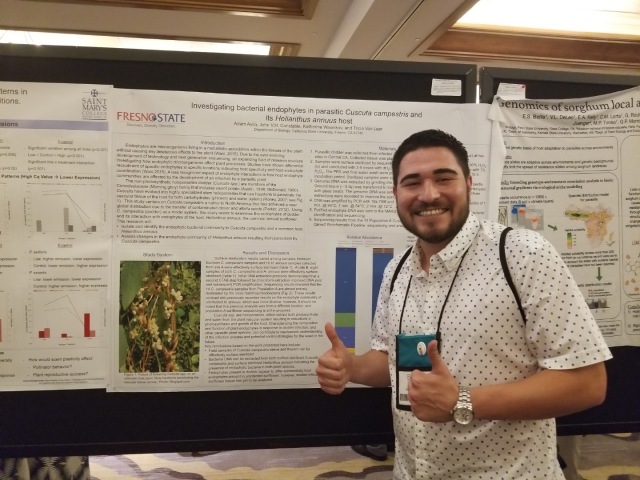 Agricultural weeds cause crop yield loss by competing with crop plants for resources, and chemical herbicides are one of the most effective ways to control these pest plants. The herbicide glyphosate (RoundUp®) is widely used in Central Valley agriculture, and many weeds have evolved resistance to this chemical, including hairy fleabane (Erigeron bonariensis).  Read more…

Investigation of the recent California agricultural invasions of Palmer amaranth and waterhemp:

The most agriculturally problematic species in the weedy plant genus Amaranthus is A. palmeri (Palmer amaranth), which has rapidly evolved resistance to six different chemical classes of herbicides.  It is native to the Southwestern U.S., but causes the most crop yield loss in the eastern U.S., and little is known about its invasion from west to east.  Read more…

Digitization of the Fresno State Herbarium:

Read more about this project on the Herbarium page.

Population genetics and the effects of polyploidy on diversity in the genus Phlox:

We are interested in this genus of wildflowers (which are almost entirely North American natives) because Phlox species have repeatedly and independently doubled their number of chromosomes.  This phenomenon, called polyploidy, is fascinating from our perspectives of plant taxonomy, phylogenetics, and population genetics.  Read more…

The Waselkov lab is continuing to conduct research in the 2020-2021 academic year, in a socially-distanced manner!